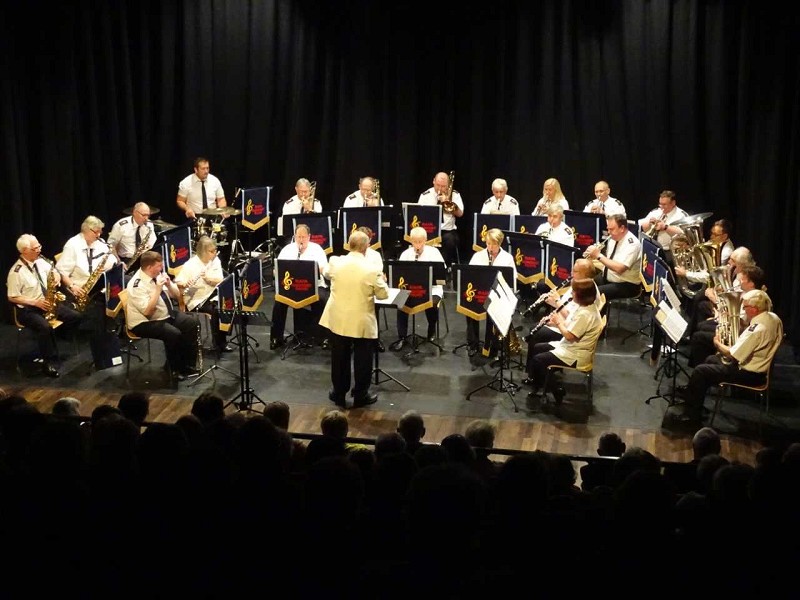 It is the 75th Anniversary of VE Day this year and the music focuses on the melodies of the 1940’s. Glenn Miller in Concert, Vera Lynn with a couple of sing-a-long medleys.

The Musical Director is Peter Skellon who somehow finds time to rehearse, organize engagements and co-ordinate the Band. In the 2013 New Year’s Honours’ he was awarded the British Empire Medal. His love of music comes from his Father a Devon & Dorset Regiment Bandsman & Bandmaster this was further extended when he chose a career in the Armed Forces.

The Musicians contribute a significant amount of their time and effort into their ’hobby’, to the benefit of both Service & Civilian Charities. The Band has played at many prestigious events since their formation in 1998. Just to mention a few; the RAFA National & Area Conferences, Bristol, Clifton & Wells Cathedral, BBC Music Live events; The Grand Order of the Water-rats’ Gala & Variety Shows; music support to Red Arrows Display; Bristol Harbour Festival; Colston Hall; International Military Tattoo, Birmingham; Cardiff Castle & in front of HRH Princess Anne on a number of occasions.