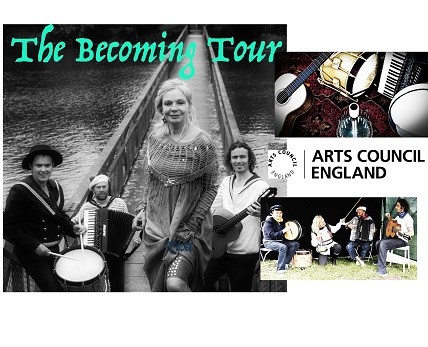 The Becoming band creates the music of the sea with intriguing percussion by folk musician Jo May and virtuoso guitar playing by Gerard Cousins. This oceanic music weaves around poetic words and singing by its creator, Nicola Harrison and the extraordinary sea odyssey that is the centrepiece of this show is shaped by Pete Watson’s accordion soundscape.

The BECOMING TOUR is a newly commissioned work supported by the Arts Council, touring Somerset, Devon and Cornwall in October 2021.

Directed by author, poet and singer Nicola Harrison, this show features selkies, mermaids, pirate girls, seahorses in a world where crabs can dance and starfish sing of outer space..

An innovative experience combining newly commissioned poetry, music, percussion and song with musical improvisation and interludes to represent the sea in all its guises. Accompanied by three world-class musicians, Nicola Harrison’s fearless representation of the ocean and the wondrous creatures that dwell in it, or live between saltwater and land, between fable and reality is experiential and utterly captivating. Intriguing sea creatures and other evocative characters populate this exquisite oceanic journey with audience participation in singing and dancing fronted by Brixham shanty group, Missin’ Tackle.

“We almost had sand between our toes after last night's performance at the Three Choirs Festival. There were four of us on the journey home and we talked of nothing else. We are still talking about it..

You gave us much pleasure, much to think about, and so many wonderful acoustic effects.’

Nicola Harrison is an author, director and virtuosic singer combining many different musical styles. She creates new works that have been performed in such venues as The Stables, Tristan Bates Theatre (West End) and many prestigious arts centres, festivals and theatres. Her previous Spanish show La Casa del Amor featuring a narrator and full ensemble of acting musicians toured the country for 3 years, while Wintetown – a through-composed piece of poetry and music performed with Gerard Cousins, is often invited to play at wine tasting and pre-concert events. The Becoming was commissioned by the prestigious Three Choirs Festival this year

Nicola trained at RNCM with Pam Cook and in Spain with legendary mezzo Teresa Berganza. As well as shows she has written several books on poetry and music and two published books of poetry. She is an Oxford University-based lecturer, where she specialises in song and performance. As an experienced vocal coach and singer, Nicola has taught the boys of Billy Elliot the Musical, and numbers among her more famous past students Florence Pugh and Tom Holland. Her students have won international

prizes, Olivier awards and performed at Royal Variety show and in private audience for the Queen. She will be coordinating the shanty singing and performing – in words and song - all the characters and tales in the evening show.

Jo May originally trained as an orchestral percussionist at the Royal College of Music and began her career working with orchestras such as the BBC Symphony Orchestra and English National Ballet. A trip to Sidmouth Folk Festival sparked an enthusiasm for traditional folk music, and now she performs with her duo, Intarsia, with fiddle player/folk singer Sarah Matthews. Intarsia released their debut album, ‘Sistere’, in October. In 2018, Jo released the album ‘Leap’ with her group Stepling, a unique blend of music, step dance and song inspired by English traditions.

Other bands and projects she is/has been involved in recently include: the duo, Against the Grain, with flamenco guitarist Matt Sullivan; ceilidh band Token Women; Moirai; Folk Dance Remixed; Komposit Young Composers’ Project; and Chodompa Music with cellist Kathryn Locke.

Jo has also had many years’ experience working as a peripatetic percussion teacher and workshop leader.

A graduate of the University of Leeds and Enschede Conservatorium (Netherlands), Gerard Cousins has performed in many festivals and concert halls around the world, from the Purcell Room and Milton Court in London to Europe, South America and the Middle East. He has released 6 albums, each one focusing on a different area of music from traditional Spanish repertoire to his original compositions and unique re-imaginings of traditional Welsh music.

His imaginative guitar versions of pieces by famous composers such as Philip Glass and Arvo Part and his own compositions have brought him media attention on Sky TV, BBC Radio 6, Radio 3 & BBC Radio Wales. He was recently a classical finalist on Sky TV’s ‘Guitar Star’ programme. His compositions have featured in films and TV and are performed by other guitarists all around the world. His latest guitar arrangements of choral works by grammy award winning composer Eric Whitacre are due to be published by Hal Leonard soon. He is also an experienced educator.

"It is obvious that Cousins is a formidable player.....hypnotic arrays of patterns and harmonies...beautiful and different... " Classical Guitar USA

Pete Watson is a versatile and experienced accordionist and keyboard player. He plays in many different styles including French, Italian, Balkan, gypsy jazz, swing, British and Irish folk, tango and classical music. He has performed or recorded with many jazz and world musicians including Gilad Atzmon, Benoit Viellefon Hot Club and Orchestra, the Bisserov sisters, and Tim Kliphuis. He has appeared or played in The Ends of the Earth (David Lan, Royal National Theatre), Cyrano de Bergerac (Communicado Theatre Co, Glasgow ROH, Almeida Theatre), Die Fledermaus, Fiddler on the Roof, The Provoked Wife, My Family (Channel 4 TV), Jude (Michael Winterbottom) and Hugo (Martin Scorsese). He leads his own group the Marama Café Band and plays with other groups inc