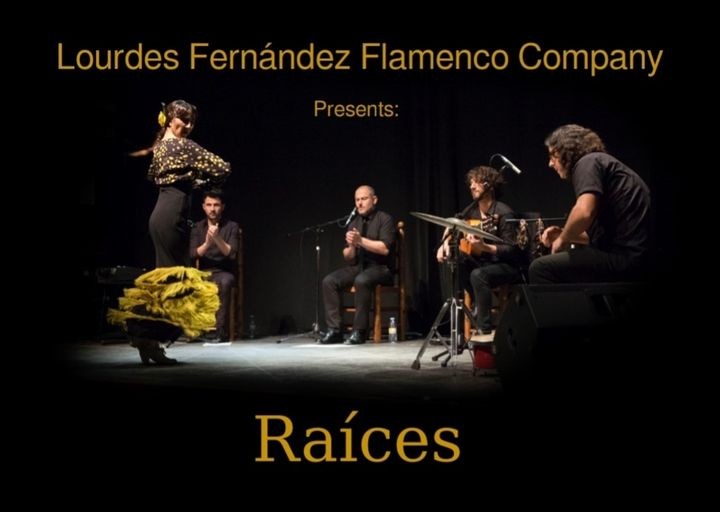 The Lourdes Fernández Flamenco Company was born in 2019, as the result of the intense collaboration between five Spanish musicians based in London.

This show aims to universalise Flamenco, to bring it to a wide and diverse audience, a show for both aficionados and novices, for those who listen to flamenco and those who do not... just yet.

Drawing on traditional flamenco, whilst adding the influences of an eclectic style of music inspired by Folk, Andalusian Copla, Jazz and other styles.

This event is presented by Teign Jazz and Blues in association with Pavilions Teignmouth.

Lourdes Fernández, dancer, studied dance at the Madrid Conservatory, graduated at Rey Juan Carlos University and completed her Masters in Performing Arts. She also taught dance at the American Saint Louis University of Madrid and participated in the UNESCO International Dance Gala. In the UK, she has performed in venues of renown such as Ronnie Scott's, Union Chapel, The Forge or Richmix and festivals around the country: City of London Festival, Jazz Festival of Birmingham and Brighton Festival. Based in London, she currently works as dancer and choreographer for  flamenco companies like Alma Gitana,  Ida & Vuelta Ensemble, Prana company and some art organizations such as Live & Local.

Adrián Solá, guitarist , studied music theory and flute at the School of modern music in Badalona, Spain. He furthered his development attending masterclasses with guitar virtuosos Zsolt Hernandi and Rafael Cañizares. Since moving to the UK, he has become a much sought-after accompanist, working regularly with established London-based flamenco dancers and singers. In an ensemble or as a soloist, Adrián is a versatile and adaptable musician who plays flamenco masterpieces as well as his own compositions.

Fuensanta Zambrana-Ruiz, violinist, and collaborator, performs and researches a wide range of music styles. Focusing on contemporary and world music, recent performances have been at Royal Festival Hall in London, BBC Radio 3, BE Festival in Birmingham, Palestine Festival in Jerusalem, Constellation in Chicago and Holland India Festival in the Hague. She performs regularly with folky-classical violin duo Duo Folclore , Arabic music band Karama and artists Shammi Pithia and Jasdeep Singh Degun.   Fuensanta has a Masters in performance and research from the Royal Academy of Music and is currently teaching violin at Trinity Laban Conservatoire of Music.

Mónica García, singer, became passionately involved in flamenco at an early age, growing up in Frailes, a small village in South Spain, where the best olive oil in the world and the Andalusian zephyr from their mountains nurtured her voice. Mónica was a prominent student at Locura Flamenca academy, later becoming involved in traditional and modern dance and music groups; albeit her young age, this soulful singer surprises and delights flamenco aficionados and neophytes alike.