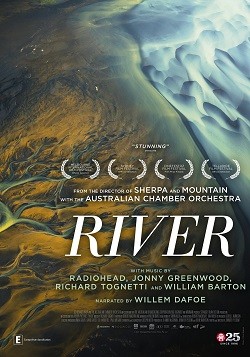 “River”, narrated by Willem Dafoe, is an exploration of the timeless relationship between humanity and rivers. Billed as an orchestral concert film, this documentary is an ode to the natural word and a retelling of the history of both rivers and human civilization.

“When the first rain fell, the Earth awakened,” reads Dafoe in the moving trailer, which features stunning footage of river systems around the world. “Where rivers wandered, life could flourish. They have shaped us as a species and we worship them as gods. Today, there is scarcely a river unspanned, undammed or undiverted. The sheer scale of the human project has begun to overwhelm the world’s rivers.”