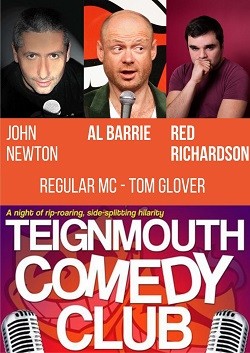 An old-school genius and regular on TalkRadio, John is what’s known as a bullet-proof act. He’s known for his inventive writing, which covers the socio-economic structure of Thomas the Tank Engine's Isle of Sodor, how to annoy spiders, fatherhood and his experiences working on the cruise ship circuit. There’s no pretensions with John, who has one of the highest hit rates of jokes per minute on the circuit.

A seasoned professional and regular at London’s Comedy Store, nothing fazes Al Barrie. From putting down heckling stags who’ve had one too many, to exploring social nuance with the quietest crowds, Al’s comedy range is massive. Al has performed all over the world and on TV in The World Stands Up

‘No one does righteous indignation with the same brio as Barrie, an inheritor of the splenetic mantle of the great 80s alternative comedians’ - The Guardian

Red is something special: Nobody else makes being hilariously miserable look quite this easy. Red’s set is a glorious 20-minute taxi ride through the dark streets of his life, a trip where you’re not sure if you’re laughing at or with him. Maybe we should ask? Actually, better not. You don’t know what he’s going through.

‘With his sonorous voice and glowering persona, he sounds like a gravelly Jack Dee, with similar aptitude for joie de vivre’ - Chortle.co.uk