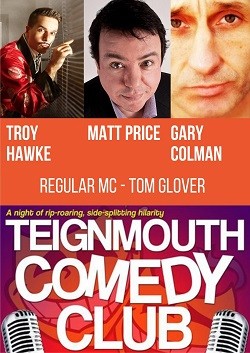 How to describe Troy Hawke? Raffish 1930's throwback, homeschooled charmer, unlikely stealer of hearts and minds, adorable cad, unreconstructed bounder, smoking-jacketed mother’s boy, scrabble enthusiast… and yet this only scratches the surface. The creation of comic genius Milo McCabe, Troy is a wonder you have to see for yourself: do so, and be transported to a world of old-school hilarity.

‘A spectacular character...brilliantly sharp, lacing his wit with a touch of the surreal’ – Fest

Cornishman Matt Price is known for having some of the most extraordinary and outrageous stories on the circuit. His style is very real and brings a true warmth and heart to the stage whilst finding some audacious laughs in the most unexpected places. Matt has worked as tour support for acts such as Russell Kane, Stephen K Amos and Norman Lovett.

‘Price is a terrific comedian and wonderful storyteller’ - The Scotsman

No, it’s not the guy who was small for his age on Diff’rent Strokes. With his Geordie accent and sideways, sometimes surreal, takes on life, this Gary Colman puts audiences in mind of Ross Noble – except that Gary has been slaying audiences up and down the country from a time before Ross’s rise to prominence. Stories that start with recognisable scenarios quickly take the maddest departures in Gary’s strange and rib-tickling tales.