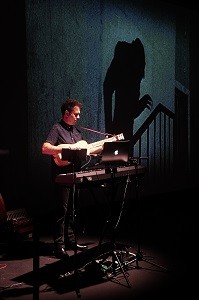 NOSFERATU - A Symphony of Horrors

The silent masterpiece with a brand-new live score.

The Film - Nosferatu (1922) is arguably the film that gave birth to the horror genre. Notable as the first cinematic interpretation of Bram Stoker’s Dracula, its combination of expressionistic acting and unforgettable images render it just as powerful and unsettling today as when it first thrilled cinema goers 100 years ago.

Chris Green’s new score was commissioned by English Heritage for a live outdoor screening of the film at Dracula’s spiritual home of Whitby Abbey. The music is a haunting blend of electronic and acoustic instruments performed live by the composer and, combined with FW

The Composer - Born into a musical family in Coventry, Chris Green began playing guitar at the age of eight and piano from the age of nine, and plays most things with fretted strings or keys. Largely selftaught, he’s worked in a variety of musical genres including folk, theatre and early music. He’s a regular musician at Shakespeare’s Globe and was also one of the musicians on BBC’s Poldark.

He also writes and composes, having adapted The Wind in the Willows (2017) for GreenMatthews as well as A Christmas Carol: In Concert (2018), which London Theatre Reviews described as “A delightful show… a lively retelling”

In 2018, he released his first solo album Switched-On Playford, which fuses 17th-century dance music with electronica, using a blend of early instruments, synths and loops. It was described by fRoots as “bloody brilliant…. an exquisitely-rendered and endlessly satisfying piece of work.”