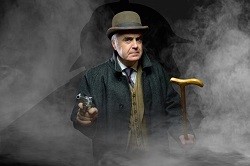 1894. Watson is alone. His beloved wife Mary and the great Sherlock Holmes are both gone. But London seethes with false reports and rumour.  It is time to set the record straight.

So Watson tells his tale... a tale of long buried secrets, betrayal and death. For there is a shadow in the gutters of London. A spider's web of poisonous intrigue lies across the city. Someone is playing a long game and Holmes and Watson face their greatest ever challenge. But as Watson unravels the story, is the game really over?

★★★★★ ‘Utterly brilliant. A great story and wonderfully performed. A full audience so book early and take all the family. Tim Marriott does an amazing job.’

★★★★ ‘A thrilling new perspective on the life of the great detective and his right-hand man. For all theatre-goers it’s a grippingly fine display of the art of the monologue from one of its outstanding exponents.’ Broadway Baby